Mr. Riggle participated in a Q&A after the award presentation and took many, many pictures. (Thank you!)

Thank you again to the sponsors who made the event possible and to Rob Riggle for participating in the Kansas City Film Fest. 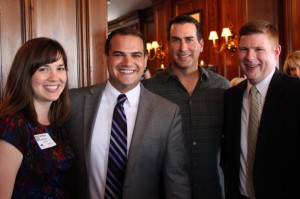 Mr. Riggle also participated in Ink’s Middle of the Map Fest Forum on Thursday afternoon where he discussed “The Big Slick Formula for Growth and Innovation.” Rob Riggle is the co-founder and host of Big Slick Celebrity Weekend in Kansas City, Missouri.