…audiences are responding to the positive messages within the film sort of like an “antidote” to the hate. They leave feeling like there might be just a little bit of hope for humanity.

Leah Warshawski and Todd Soliday are the brave filmmakers who produced the documentary feature FINDING HILLYWOOD. Through the eyes of Warshawski and Soliday we witness the power of healing through a newly emerging film industry bringing people together in post-genocide Rwanda. Creative expression, storytelling and collaboration mark the incredible journey of repairing a country after unimaginable atrocities. I had the great pleasure of welcoming Leah and Todd to Kansas City in 2014 when they came to screen FINDING HILLYWOOD for a KC FilmFest Spotlight event. I was taken with the clarity of their vision, the boldness of their documentary work and I knew then that they were artists to watch. Their next project is a feature documentary six-years in the making – BIG SONIA, the story of an unlikely hero…a woman with “an enormous personality and fragile frame [that] mask the horrors she endured in the Holocaust to make a new life in Kansas City…” [via BigSonia.com]

We are thrilled Leah Warshawski agreed to be our next KC Film Spotlight. Leah is the co-director and producer of FINDING HILLYWOOD, the director and producer of BIG SONIA and has been assistant marine coordinator on familiar titles such as – LOST, ALONG CAME POLLY, HE’S JUST NOT THAT INTO YOU, SURVIVOR and BAYWATCH to name a few.

KCFO: Your latest documentary feature film BIG SONIA is about the life of Sonia Warshawski, a national treasure [and Kansas City treasure] and Holocaust survivor. What motivated you to make this film?

LEAH: We were motivated to make BIG SONIA because Sonia – and her family – have important lessons that are so needed in today’s world. We began making a humorous short film about a tiny tailor shop in a dying mall, but the film turned into a deeper exploration of trauma and the affect this has on generations – and lots of other surprises along the way. Our story arc grew and changed throughout 6 years of production and we could not be happier with how the film turned out.

This film – and its lessons – have never been more important. There is a lot of hate in the world and audiences are responding to the positive messages within the film sort of like an “antidote” to the hate. They leave feeling like there might be just a little bit of hope for humanity. And that’s one of the greatest gifts of the film for us as filmmakers. We’re grateful that BIG SONIA helps people overcome their own challenges and the message of love is one that we could all use.

KCFO: In 2015 BIG SONIA was an official selection of Hot Docs Forum in Toronto where only 19 projects from around the world are accepted. What was the experience like to pitch BIG SONIA to networks and broadcasters? What did you take from that experience that helps you as a creator/filmmaker?

LEAH: It was a very scary and nerve-wrecking experience but also the best pitch forum we’ve been to. They were very supportive and gave us mentors to help with the pitch before we presented. We felt honored to be one of 19 projects and perhaps it was a blessing and a curse that we had to pitch first out of all the projects. I would highly recommend the HotDocs Forum to all filmmakers – it’s a great festival to attend as well.

KCFO: You’ve been able to generate a lot of attention and buzz around this film, including becoming IndieWire’s Project of the Month – how did that manifest?

LEAH: I don’t have kids, so I always say that my films take up more time than raising a child. We are always working on our documentaries and producers spend at least 50% of their time working on marketing and promotions. We have a great team including our outreach assistant Chelsea Mohr and our PR guru Ryan Davis at Smarthouse Creative who help a great deal. Also, Sonia has always wanted to be a movie star and she’s an entertaining and engaging character. There are many elements in the film that make it easier for us to market and create merchandise and specialized pitches. A big part of the buzz we generated for the IndieWire campaign came from the students at Lakewood Middle School and our local Kansas City project advisers who went above and beyond to help with this campaign. We would not have won Project of the Month without them! The campaign came down to the very last few minutes when we were neck and neck with our friend’s film OUT OF LUCK (which Todd also edited). 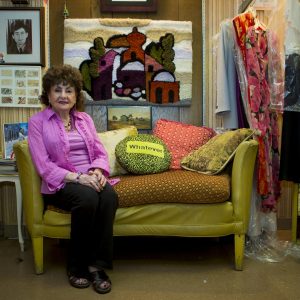 Sonia sitting in her tailor shop

“An unforgettable woman refuses to forget in this thoughtful exploration of history’s fallout.” – The Hollywood Reporter

KCFO: FINDING HILLYWOOD was your first feature documentary, what did you learn from that process that you applied to the creation of BIG SONIA?

LEAH: We learned so much from our entire experience with FINDING HILLYWOOD, and I’d say we’re still learning! The learning process never ends. This film and BIG SONIA are very different projects, but we’re trying to use our knowledge and expand on it every day. Distributors, agents, networks all have changing needs and rotating staff so even though we’ve made a feature there are no “guarantees” for our next one. A few things we learned on our first feature:

Here are 2 articles I wrote about some of our trials and tribulations with FINDING HILLYWOOD (click to read).

KCFO: Where can we see BIG SONIA and how can we support you?

We have a lot of festivals and events coming up and they are all listed on our website – www.bigsonia.com – please check those out and spread the word.

Now that the film is done, we still have a lot of work to do to make sure its SEEN by a broad audience. We call this “Phase 2.”

We’re currently raising funds for a theatrical release in Kansas City this Fall and a massive community outreach and screening campaign. All donations to this effort are tax-deductible. Donate at www.bigsonia.com or email leah@inflatablefilm.com for more info. We’re offering producer credits for donations over $50k. With your help we can reach more than 500 communities and theaters around the US.

Leah, thank you for being our spotlight. We can’t wait to see BIG SONIA! We admire your work and want to stay in touch as your career unfolds – we are rooting for you. 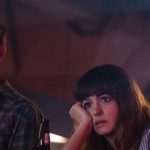