HOLLYWOOD at HOME – Help us bring these films to the next level! 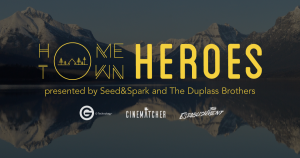 The first ever #HOMETOWNHEROES campaign to bolster new film voices from the middle of America is here from Seed & Spark and the Duplass Brothers. We need your help to put KC on the film map!

Seed & Spark is a crowdfunding streaming platform known for supporting diversity and independent voices. They have partnered with Mark and Jay Duplass (Duplass Brothers Productions) who are indie success stories in their own right with at least 10 films debuting at Sundance Film Festival, a four picture deal with Netflix and deals with HBO and Amazon. They can be seen as the characters ‘the Midwives’ on The Mindy Project, Jay Duplass is familiar as Joshie on the award-winning show Transparent and the brothers co-created HBO’s Togetherness which stars Mark Duplass. They have independent creative spirits and create fresh, challenging work. The Duplass Brothers along with Seed & Spark are interested in fostering stories that are also fresh and challenging from filmmakers not living on either coast.

Here is the deal – The Duplass Brothers will give up to $25,000 to up to 5 projects, plus they will become Executive Producers to the film(s), adding their experience and clout to further the project(s).

What you can do – ‘FOLLOW’ and ask your friends to do the same:

WRETCH is the first-time feature for Kansas City filmmaker Matthew Dunahoo (of Elk’s Pride Pictures. Matthew has written, produced and directed award-winning short films as well as founding and curating the popular First Friday Film Festival. This year he was tapped by IRISH Fest to curate an IRISH block of films during the recent weekend long festival. This picture will be filmed entirely in Kansas City.

THE WAY IT GOES is a female driven comedy by local veteran indie filmmakers Lolo Loren and Patrick Poe of IX Film Productions. These award-winning and busy filmmakers are in post-production on their fifth feature film. The film emphasizes the importance of happiness while flipping gender stereotypes on their heads. This picture will be filmed entirely in Kansas City.

PARALLEL CHORDS uses music, drama, surreal imagery and a complicated relationship between two talented artists, father and daughter, to test stereotypes, beliefs, and obligations. Catherine Dudley-Rose is an award-winning writer/director/actress/musician. She is a National Film Challenge winner, and an Emerging Director finalist in Seattle, along with winning the “Curator’s Pick” cash prize from WIF Seattle president Virginia Bogart for the short version of Parallel Chords. This picture stars a KC-actress, Laura Kirk, and is sponsored by KCWIFT which Catherine Dudley-Rose is a member of and will be filmed entirely in St. Louis, Missouri.