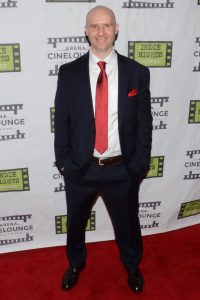 David Tittone on the red carpet in LA

David Tittone has been working hard! He wrote, directed and starred in his recent feature film, Top Coat Cash. This bank heist film features Johnny Thompson, a professional MMA fighter who has returned home after losing a major fight. Upon Johnny’s arrival home he reunites with various individuals from his past who have bold opportunities for him (now streamable on Amazon Prime and VOD.) Top Coat Cash is an independent film that showcases the versatility of Kansas City as a filming location. Tittone says, “To date, Top Coat Cash has been very fortunate with critical acclaim and distribution success. We would feel honored if critics and the press in Kansas City would respond favorably to what the Kansas City Community has accomplished with the creation of Top Coat Cash. Over 1,000 Kansas Citians were involved in the creation of Top Coat Cash. When you watch Top Coat Cash, you are witnessing the culmination of the collective creative efforts of all these contributors.” Indie Rights Movies is even featuring TTC at Festival de Cannes – 2017. Keeping the momentum going, Tittone has started pre-production for his next feature film Serpentine. While he had the chance, we interviewed Tittone for our monthly Local Spotlight. 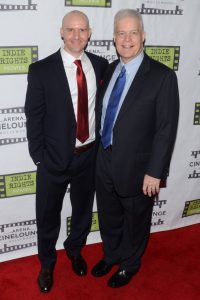 KCFO: Where did the idea of Top Coat Cash come from? Is this your first feature/what is your background?

DAVID: I co-wrote the script with my father, David Torre. We have always dreamed of writing/filming a bank heist film, so TCC was inspired by our love and fascination with this sub-genre of crime films. In addition, TCC was envisioned to serve as an example of how the average person can overcome great odds. The anti-hero in this film is symbolic of how one of the masses can challenge and overcome life’s obstacles. Top Coat Cash captures the reality, brutality, and toughness of life through the experiences of an anti-hero that constantly holds to the mantra “no matter what the odds, no matter what others believe, I can and I will overcome”. In so doing, the central question of the film “In a world where everyone is bad, how do you tell who is good?” is answered. In real life, the average person is diverse and global. Top Coat Cash reflects this global diversity and was made for every man, every woman and every race. Lead roles were filled by an American Indian, Hispanic, African American, Italian, Korean, old, young, and very strong female actresses. Dig into their background and you will find the cast, crew and producers have life experiences that mirror the toughness and diversity portrayed in the film.

“The diversity of the cast, crew and characters, and the unconventional yet frightening way in which the antihero of TCC overcomes all the odds stacked against him, are symbolic of how anyone can overcome adversity and survive in a complex world.”

In 2013 I wrote, directed, produced, and acted in a $7,000 mafia film titled “Subdued.” I funded the movie myself with the goal of creating a good, entertaining film that I could use as model of what I could create if I had a decent budget. So, after Subdued, my father and I wrote the script for Top Coat Cash. After completing the script, I pitched Top Coat Cash to Paul Strohm, a very successful Italian-American businessman in Kansas City. He had seen and liked Subdued, and loved the script for Top Coat Cash, so he agreed to come on board as Executive Producer for TCC. Together, along with our producing team – Larry Parrish, Staci Klinginsmith, David Torre, Mike Webb, Harley “Papabear” Riddle, and Rodney Phillips – we tackled the many challenges facing today’s independent film makers – challenges that at different stages of the project can often seem insurmountable. 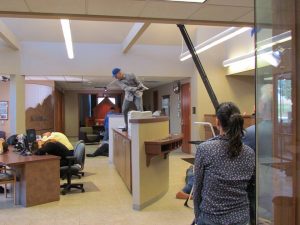 KCFO: The film centers around bank heist, tell us about the locations process and the requirements you faced for filming?

DAVID: When my father and I wrote Top Coat Cash, we knew that we would face various obstacles in obtaining the locations needed to capture the true essence of the film. Considerable time was spent exploring various locations both inside and outside the Kansas City Metropolitan area. The largest obstacle we faced was obtaining banks that would not only work with our tight schedule, but also provide us with the time needed to film complex scenes. The producers had done extensive research prior to seeking banks for Top Coat Cash, and we learned that it would be extremely difficult to find suitable bank locations. As a team, we feel extremely fortunate to have been granted access to the various bank locations provided for Top Coat Cash. Finding the right location is a challenge for every film maker.  I would suggest that any film maker who is considering filming in a bank should anticipate spending a significant amount of time and energy (weeks/months) in order to identify the specific bank locations that will best help bring their vision of the script to life.  Making a film with a bank heist is not much different from shooting at other locations – it takes courage, grit, and the ability to adapt and make creative decisions. That’s what makes being a film maker so much fun!

KCFO: How as being the writer/director/star for this film? What challenges did you face and how did you deal with them?

DAVID: While directing and acting created challenges, being a co-writer on the film was an asset. As the writer of Top Coat Cash, it made my role of directing much easier because I already knew the vision and overarching themes associated with the plot and character development. In addition, I believe successful independent film makers are entrepreneurs that win by teaming, learning, and benefiting from the knowledge and experience of others. I am very lucky to have producers who believed in the TCC vision.  They are my advisory board of close personal advisors not only for Top Coat Cash, but for my next film, Serpentine.  My role as Director was one of visionary, project manager and implementer of the great ideas that came from all involved in the project.  Any success of Top Coat Cash has to be shared collectively by the Producers, Cast and Crew, and the Post Production Team.  I shared my vision for TCC and for each scene with this team.  Their talent and incredible hard work helped translate that vision onto the screen.  The role of Johnny, an MMA fighter, was a difficult role to fill. I had an interest in playing the role, and had been training for months in preparation – martial arts, weightlifting, etc. Physically, I was in a position that I thought I could effectively portray Johnny (I was benching over 300 pounds and was in great cardiovascular shape). So, in addition to the other responsibilities of directing and producing, I expressed my interest in the role to Paul Strohm, the producers, and the casting director, Staci Klinginsmith. After much discussion, I was eventually cast as Johnny in the film.  One of the reasons Johnny was a difficult role to fill was due to the physically demanding nature of the part.  As an example, in the course of shooting the MMA fight sequences I suffered a broken thumb and hernia. The fight sequences look great. The credit for this has to go to the talent of the assistant director (Nick Tittone), choreographers (Larry Parrish, Louis Pena, Greg Richter), cast, crew and post production team, as it’s particularly difficult to direct really good scenes when one is acting.  Just to be clear, I believe the team the independent film maker pulls together is a significant contributor to the quality of the film.

KCFO: How was your experience producing and filming in Kansas City – casting, locations,crew,etc? 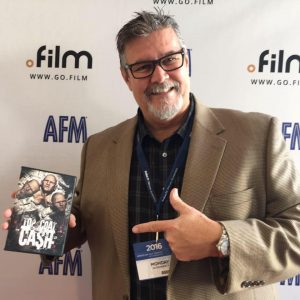 DAVID: From a casting standpoint, the Kansas City Metropolitan area has many talented actors and actresses. We were fortunate in that we had little difficulty finding and casting the correct talent for the many roles we had to fill. Because of the history of the Independent Film Community in Kansas City, we were fortunate to meet all of our crew and post-production needs using local talent. In addition, the community at large is very supportive of filmmakers. Kansas City Mayor Sly James is very supportive of film and the arts, and has expressed his personal excitement about Top Coat Cash. A large part of our success in filming in Kansas City is due to our Executive Producer Paul Strohm. Paul was instrumental in providing the executive leadership that made Top Coat Cash a success.

KCFO: Where does the film go from here and what can we do to support Top Coat Cash?

DAVID: Top Coat Cash, at 104 minutes, looks great, and we are beyond pleased with the final product. With the expertise of our Emmy Award winning editor and Post Production Supervisor Cara Myers, we have crafted a very entertaining film with a high level of production value.  Our Post Production team, including our Sound Designer Alex Niedt, Composer Sam Billen with Primary Color Music, Colorist Taylre Jones, Motion Graphics Artists Darton Simons, and Emmy Award nominated VFX artist Bryan Keeling, have each done an astounding job and have elevated this film as a result of their expertise. 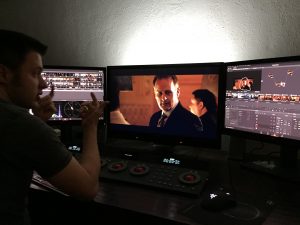 Top Coat Cash premiered in Kansas City in May at B&B Theatres in Overland Park, Kansas. In May of 2017, Indie Rights will be featuring Top Coat Cash at Cannes.

Be sure to support Top Coat Cash on social media and follow them on their journey to Festival de Cannes!